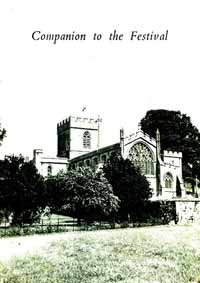 The public liturgy of the Church of England, though contained in one Book of Common Prayer, is today performed in two distinct ways. In our parish churches, it is performed principally by the congregation. In our cathedrals, it is performed principally by a rehearsed choir of professional musicians. In the cathedral services congregations take no active part other than in the occasional hymn: they are said to worship silently. Can this be justified as a form of congregational worship? Such a form of worship was never originally contemplated; and mere long usage, during the last 500 years (largely through the accident of history), is no justification. The true justification is that it provides the congregation with an opportunity to worship God through beauty; and such a form of worship has never been needed more than it is today, in our own unbeautiful world. Active congregational worship must always form the core of our public worship; but a liturgy which embraces not only this, but also worship through beauty, is one which is infinitely the richer for it.

Cathedrals are the obvious home for such a form of worship: their buildings are, collectively, more beautiful than parish churches, so enhancing a beautiful liturgy; they are, generally, endowed with a choir which is chosen after keen competition and which has ample time for rehearsal; and they do not have parochial responsibilities. But there is no reason why such a form of worship should be confined to cathedrals: if the resources are available, worship through beauty is as appropriate to a beautiful parish church as it is to a cathedral, and, as an enriching of the liturgy, as beneficial to the congregation. But if worship through beauty is to be practised in a parish church, it must be in supplementation of active congregational worship, and not in substitution for it. It is with this in mind, that for one week each summer choral services are sung in the Priory Church of Saint Mary, Saint Katharine and All Saints, Edington.

During the early years of the Festival, attention was concentrated principally on the service of Evensong. This was hardly surprising since the worship of cathedrals has for many years been identified with daily choral evensong, and since evensong was the only service which could be sung at a time which was convenient to congregations. But this was a false emphasis. The Eucharist is the central service of the Christian liturgy, and should be the climax of any Christian festival. In 1959, therefore, the Solemn Eucharist, which had in previous Years been celebrated on the Friday, was transferred to the Sunday, so that the last service should fall on the Lord’s Day and so that it should form the climax of the Festival. The service was sung to William Byrd’s setting of the liturgy for one of the feasts of the Blessed Virgin Mary. Both the position of the Solemn Eucharist in the Festival and the music which has been sung at that service have been preserved in subsequent years as the greatest glory of the Festival.

William Byrd’s setting of the complete liturgy for the major festivals of the Christian Year is at once one of the most beautiful and most neglected things in the whole of English Cathedral Music. Byrd intended his three Masses to be sung in conjunction with his ‘Gradualia’: the Masses provide the Ordinary (Kyrie, Creed, Sanctus and Benedictus and Agnus Dei), the ‘Gradualia’ the Propers (Introit, Gradual, Alleluia, Offertory and Communion). This music, when heard in its rightful liturgical context, brings a splendour and power to the Eucharist which has never been surpassed. Yet where is this music to be heard? A costly battle for the publication of a practical edition was won many years ago; yet, to the shame of the Church of England, this music remains very largely ignored. Once a year it can be heard at Edington.

This year the third of Byrd’s settings of the liturgies for the various Marian feasts – for the Feast of the Purification of Saint Mary the Virgin – will be heard on the last day of the Festival. The music will be sung, as it was originally set by Byrd, to the medieval Latin texts: to sing an English translation of the Latin, though not impossible, would be to destroy much of the beauty of the music. So that the Latin may be understood, a translation has been provided, where it does not appear in the Book of Common Prayer, on pages 21 to 23 of this Companion.

Another feature of the early years of the Festival was that the services were confined to those of the Book of Common Prayer. The Prayer Book services must always form the foundation of public worship; but they, alone, do not and cannot meet the needs of the people. Something more is needed; and there is room within the Church of England for liturgical experiment and development. The most striking and successful example of this is in Archbishop Benson’s revival of the Festival of Nine Lessons and Carols, now commonly associated with Christmas, though also observed in some places at Advent and Epiphany. Following this form of service, which itself is based on medieval precedent, the Procession of the Christian Year was introduced into the Festival of 1960. This service, which portrays the Life of Christ through the Christian Year, is built up on the ancient threefold basis. Thus, the service, taken as a whole, comprises three parts: the Coming of Christ, the Passion and the Triumph. Each part, which is marked by procession and station, comprises three festivals. Each festival comprises three items: playing, reading and singing. The chorale preludes, which have all been chosen from Bach’s ‘Orgel-Büchlein’, were each written for the festival which they represent. It is hoped in this way, in the words of Bishop Colin Dunlop, to reconstruct the Procession as a liturgical means of leading modern congregations into a more ready understanding of the Christian Faith.

The most important development of the Festival, however, has been made this year. Now, for the first time, the complete Opus Dei of the Church of England – Matins, Holy Communion, Evensong (with the Litany on Wednesday, Friday and Sunday) – is to be sung each day during the week. In achieving this, the Festival is performing a duty which is imposed on all cathedrals, but which, for economic reasons, is performed by none of them. Another effect of this development is that Evensong is brought into a truer perspective, as a service, which, with Matins, is subsidiary to the Eucharist.

The complete Opus Dei can only be sung at Edington (if rehearsals are to be maintained and a holiday atmosphere preserved) by dividing the musical forces into two. Therefore a plainsong choir, under the direction of Warren Green, has been formed to sing Matins and Holy Communion each morning, the Litany on Wednesday and Friday, and Evensong on the two evenings when it is not sung to polyphony, Thursday and Saturday. The emergence of a plainsong choir is, however, in itself an important development. Many people believe not only that plainsong is the only form of real congregational music but also that, as an expression of worship through beauty, it has far greater possibilities than polyphony; and although there are many excellent polyphonic choirs within the Church of England, there are very few good plainsong choirs.

The plainsong choir has been, and is to be, formed in an unusual way. It will consist of four regular members, together with as many people as are willing to sing at any one or more of the plainsong services. Occasional singers must attend the rehearsal immediately previous to the service at which they wish to sing. The rehearsals, which are all held in the Parish Hall, are on Sunday, August 27, from 4.30 to 6.00 and from 8.00 to 9.00 p.m. and on each weekday morning from 10.30 to 12.30. All are welcome.

The plainsong to be sung has been chosen entirely from the Sarum Use and from the compositions of John Merbecke. At the Holy Communion each morning, the Propers are sung to the music appropriate to the day, and the Ordinary to music of the 10th, 11th, 12th, 13th and 16th centuries successively.

For all this, Evensong retains much of the glory of the Festival. From Monday to Friday each evening the polyphonic choir will sing the music of successive schools of composition from the 16th-century to the present day. Each service is opened and closed by one of Bach’s chorale preludes from the collection ’18 Choräle von verschiedener Art’.

The Festival of 1961 holds an important position in the festivities which have marked the Sixth Centenary of the Dedication of the Church. Against a background of frequent and regular concerts of music throughout the summer months in Salisbury, Bath and Edington, the festivities opened in the quietest way possible with the singing of Tenebrae during the last three days of Holy Week by members of the Music Festival Choir. The climax of the festivities came on the Dedication Festival itself, on Trinity VI, when the Bishop of Winchester (one of whose predecessors founded the Church) preached at the Parish Communion, and when the Bishop of Salisbury (one of whose predecessors consecrated the Church) preached at Evensong. It is fitting that these festivities should end with a week of services to the greater glory of God.