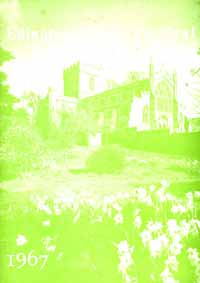 The extent to which different art-forms have been used in worship has varied from century to century. When the influence and power of the church has been strong in a certain place or during a certain period of time then generally speaking the arts have responded accordingly. So one can see reflected in a particular style of music, or of painting, or architecture, the contemporary attitudes of the church. It can be argued that one sign of the waning influence of the church at any given time is when the church does not commission new music, or when it relies on an out-dated style of architecture in which to build. The years after the Civil War are an example of this in England, and the same may be said of the first fifty years of this century. However there are now signs that the church in this country is once again becoming aware of its traditional role as a patron of the arts. This is seen in church building for example and in particular by the building during the past decade of Coventry Cathedral and the Metropolitan Cathedral of Christ the King in Liverpool. The use made of contemporary music in the church varies from one extreme to the other; only time and fashion will tell what is considered to be representative of mid-twentieth century church music. Festivals of the arts are in a privileged position in that they can pick and choose examples from past centuries and commission paintings, music, poetry and sculptures from present day artists.

In the choice of music for the Edington Music Festival over the past years the Festival has tried to remain aware of its role in this respect. Perhaps music of the 19th century has been most neglected, but the Mass by Franz Liszt (1811-1886) and the Motets by Anton Bruckner (1824-1896) this year help to compensate for this omission. A Mass has been commissioned from Simon Preston this year and four of the five sets of the Propers for the Mass that he wrote for the 1966 Festival are being sung again.

Another innovation to this year’s Festival is the use of instrumental music. A string quintet accompanies the anthem by Purcell ‘My beloved spake’, and plays a Fantasy by Purcell after the same service. Instrumental music alternates with the Bach chorale preludes after Compline on weekday evenings.

Father Geoffrey Beaumont is the preacher at this year’s Festival. He is best known for his efforts to introduce a new art-form into worship, namely that of ‘pop’ music. His compositions include the ‘Twentieth-Century Mass’ and a number of hymns in the same idiom, one of which is sung at Evensong on the Thursday of the Festival. Father Beaumont is now a member of the Community of the Resurrection, Mirfield.

The service of Readings and Music on the Saturday evening of the Festival is a new departure. Chichester Cathedral has broadcast similar services and they have been popular. This service is built on the dedication of this Church, namely St Mary, St Katharine, and All Saints. The ‘Prayers of Life’ by Michel Quoist, from which three of the readings are taken, by no means meet everyone’s taste. However they make compelling reading well summed up by a review which described the ‘Prayers’ as a book which ‘blows a breath of fresh air into a section of the library usually so dull and dusty’. The first section of the service is devoted to St Mary. The Bruckner motets, in a traditional way, speak of Mary as the Mother of God. In a very different way the Quoist poem ‘The Pornographic Magazine’ is saying the same thing, summed up in the words from St John’s Gospel, ‘So the Word became flesh’.

The story of St Katharine is one of the most far-fetched of all the many tales attributed to saints. Perhaps one can best look upon her as a person who was prepared to maintain her beliefs in the face of overwhelming odds. Quoist’s prayer ‘He was in the middle of the street’ shows how easy it is to compromise, to stand on one side of a seamy situation, uninvolved, not daring to act on one’s beliefs.

On All Saints’ Day we remember the countless individuals who have led a life which following generations have wished to remember. Quoist in ‘Football at Night’ draws an analogy between players in a game of football and the part which all men can play in the game of life.

When a chorister’s voice breaks he is often impatient to be singing again at once. The opportunities of doing so until his voice has settled are few. This is the reason for the creation of another choir at the Festival which has been christened the ‘007 Group’! This group is to sing Matins each morning and Evensong on Monday, Friday, and Saturday. The music cannot be chosen beforehand but it is expected that at least an anthem will be sung at each service. Any visitors who would like to join the Group for one or more of these services are welcome so long as they make themselves available for the rehearsal immediately preceding the service at which they wish to sing. Times of rehearsals can be obtained from David Calcutt who is in charge of the Group or from Hamish Preston who is running the Group’s music.

The following places may be of interest to visitors who are staying in the locality for all or part of the week: The Roman Baths and Bath Abbey, The American Museum (Claverton, Bath), The Salisbury and South Wiltshire Museum (St Ann Street, Salisbury), Wilton House, Longleat and the Lions, Lacock Abbey and Village, Stourhead Gardens, Wookey Hole Caves, Wells Cathedral, Salisbury Cathedral, Stonehenge, Rode Bird Sanctuary and Tropical Gardens (near Trowbridge), Bradford on Avon Saxon Church and Tithe Barn, Avebury Stone Circle and Manor House, Nunney Castle (near Frome), Farleigh Castle (Farleigh Hungerford, near Trowbridge).

I hope that as many visitors as possible will meet members of the Festival. Coffee will be available for visitors in the Parish Hall between 10.15 and 10.45 each weekday morning.