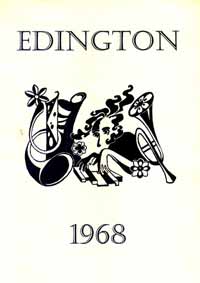 The 1967 Order of Holy Communion has now been in use in parishes throughout the land for some months. Hence many people will be familiar with it and will have realised its strengths and weaknesses. Certainly one of its great strengths and one reason for its very existence is its clarity. The old order, that of 1662, suffers from a surfeit of words, and the pattern of the service is hard to follow, however much one admires the beautiful seventeenth-century language. One way in which clarity has been achieved in the 1967 Order is to allow for the greater participation of the congregation. When, as at Edington during the Festival, we have the benefit of two choirs, this participation may perhaps be lost again. However, if a beautiful act of worship performed on behalf of the congregation by its specialist members has a place in the church’s variety of forms of worship, then the 1967 Order ought to allow for it. This is an experimental order, and as such it should provoke comment and criticism. It is to be hoped that such constructive criticism will arise from the way in which the 1967 Order is used at this year’s Festival.

Visitors, and indeed those taking part in the Festival, could not be blamed for finding the timetable of services somewhat puzzling. Let no one be tempted to think that the planning of this week is a straightforward task, for over the years the Festival has acknowledged an ever-increasing number of demands. Hence it is often difficult to make a list of priorities, and difficult to achieve a compromise between conflicting priorities. All would agree that the Solemn Eucharist is the chief act of worship during the day, but we would also like to sing the complete Opus Dei. Yet how far is it musically practicable to sing Matins, the Eucharist, Evensong, and Compline each day? In any case how relevant are the services of Matins and Evensong to the pattern of worship of the church of 1968? Apart from the Mass with its direct and unbroken link with the Last Supper, should services be more flexible in order to meet the apparent needs and demands of a given community?

So with such conflicting and unresolved ideas the timetable for the Festival emerges as something of a hotch-potch. The time of the Solemn Eucharist, at 11.30 am, remains unchanged each day and it is sung by the Festival choirs. These two choirs, Choirs One and Two, also begin the Festival with Compline at 9pm on the first Sunday, sing Evensong on the Tuesday, Thursday, and Friday at 7.30pm, at 4pm on the Wednesday, and sing the Service of the Christian Year on Saturday at 7.30p.m. The other choral services during the week are sung by Choir Three. This group consists largely of past choristers whose voices have broken recently but who enjoy a week’s singing. They have a large pool of music, both instrumental and vocal, from which to draw according to their resources. Every day of the Festival ends with Compline, and at the close of this service a very short cello solo is played during which the congregation kneel in silence.