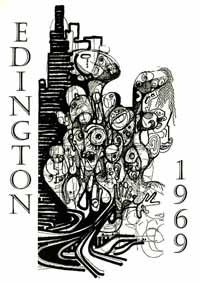 The first Edington Music Festival was held in 1956. Since then hundreds of people have taken part in it and thousands have come as visitors. Only one person, Ralph Dudley, the Vicar of Edington, has taken part in every Festival. In 1956 he and the village were faced with the problem of raising a vast amount of money to prevent this fine church from collapse. The Music Festival has been instrumental in attracting attention and as a result money to this cause. The initial target has now been reached. But there remain further needs and among them the need for a new organ. It is appropriate that the Music Festival should be associated with this in particular. Thereby the Festival will continue its support and close association with the village.

Three choirs sing the services of the Festival. They are the ‘Choir’, the ‘Consort’, and the ‘Group’. The ‘Choir’ is similar to a conventional cathedral choir; its members, fourteen boys and twelve men are drawn from such cathedral and collegiate choirs in different parts of the country. The ‘Consort’ is made up of sopranos, altos, tenors, and basses. In this country we are not accustomed to women taking an active part in cathedral worship. Besides the strong influence of tradition it is not at all clear why we should not have a ‘Consort’ singing a cathedral’s service. Increasingly cathedral choirs find themselves in financial difficulties and in time perhaps some cathedral choirs as we know them will disappear and a small ‘Consort’ drawn from the local community will sing at a variety of community functions, both secular and sacred. The ‘Group’ is intended primarily for past choristers, all of whom enjoy a week’s music and some of whom value the experience in preparation for forthcoming choral scholarship trials for university collegiate choirs. The ‘Group’ has a large pool of music, both vocal and instrumental, upon which to draw according to its resources. Members of the group will also serve at the daily Solemn Eucharist.

The ‘Choir’ and the ‘Consort’ share the music for the first service of the Festival, Sunday’s Compline, the daily Solemn Eucharist, and the service at 7.30 in the evening. The ‘Group’ sings and plays at the afternoon service which is usually Readings and Music. The final service of each day, Compline, is to be sung by all those present. It will end with a very short instrumental solo during which the congregation kneel in silence.