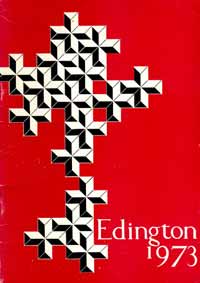 To the outsider the festival must seem much the same from year to year. Faces may change but the character and atmosphere of the week remains fairly constant. And this is true, for the intention of the festival remains unaltered – that is to provide music worthy of the liturgy and the setting of Edington.

Looking back through the Companions for past festivals, the changes in emphasis, in the presentation of the liturgy, in the choice of music, and in the size of the festival become apparent. But overall they give little clue of the radical changes that have been encountered in the liturgy since the festival began in 1956. These years have seen the introduction of the three series of alternative services – the official culmination of a movement that has brought about the diversification and questioning of every aspect of the church’s life as well as its worship. Church music has not been excepted. The accepted Anglican traditions of hymns, chants, canticles and anthems have all been scrutinized, and alongside them have appeared every style and genre, contemporary and ancient, popular and esoteric, with their share of the good, the dull and the trivial. Despite the questioning, cathedral choirs remain, much unchanged, and – perhaps more surprisingly – so do their choir schools.

In the reflection of the cathedral tradition stands Edington. It is from this tradition that the singers come and that much of the music is drawn. But in this single week we aim to present a far more intense programme of daily services with music this year drawn from ten centuries ranging over 1400 years. Most of the music is English in origin, and in this the programme comes closer to the early years of the festival which were devoted entirely to English cathedral music. And for the first time since 1964 there is just one choir, of men and boys.

The decision to reduce the size of the festival is based on practical problems. It is not hard to find 50 singers who are happy to come on a working holiday to Edington, but providing beds, food, robes and rehearsal facilities in so small a village does cause many problems, stretching the resources available beyond their limits.

When choosing the music to be sung, one is conditioned not only by practical considerations and rehearsal schedules, but by one’s changing attitude to the festival. Every year it appears as a new and fresh event. And so during the past seventeen years it has changed with the tastes of the three directors and their conductors, with the practical experience of running the festival, and with the constantly changing attitudes to a week that is apparently fixed in intention and character. I come to this year’s festival after a year of work in another denomination. As Director of Music at the Metropolitan Cathedral in Birmingham I have been faced with the radical changes in the liturgy that have followed Vatican II. After a year of exploration and experiment, it is a joy to return for a time to the stability of Anglican traditions.

While the festival attempts to present some of the best music written for the liturgy it does not draw exclusively from the cathedral repertoire. Not only does it attempt to keep pace with liturgical changes, but to complement them with new music. At the same time the festival attempts to re-introduce music to the liturgy. As well as Byrd’s Masses for three and four voices, an English anthem, recently discovered and edited by Peter James, is included in this the 350th anniversary of his death. And on Wednesday at the Solemn Eucharist there is also an opportunity to hear one of Frescobaldi’s organ masses in its intended liturgical context.

Some would suggest that the music would be better performed unencumbered in concerts and recitals. But this is not Edington’s concern, and in this sense it is perhaps a mistake to describe it as a music festival. The services are not intended to be dominated exclusively by music; there is never a notion of concerts with moments for prayer. Rather, the balance of actions, words, music, and silence should achieve that artistic unity that is true liturgy.

At a time when the church is so concerned with relevance and intelligibility in both its work and its worship, it may be unfashionable to consider a public service as an art form. The social conscience and work of the church is most obviously justifiable and comprehensible to a secular society. But it is only one aspect of the Christian commitment, an aspect that can ignore the wonder, the majesty and the mysticism, the intangible spirit that raises the church above the level of a didactic social service organization. And we must not be ashamed to offer worship that strives for the quality of art in its formal presentation ‘ad maiorem Dei gloriam’.