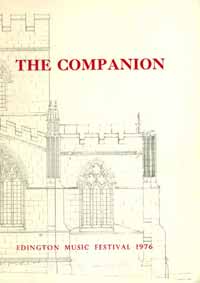 “Therefore man, whom Thou hast made to be conscious of Thee, must consciously praise Thee in thought and word and in deed.”

The conscious praise demanded in T. S. Eliot’s paraphrase of ‘Te Deum laudamus’ at the end of ‘Murder in the Cathedral’ is the task of everyone at Edington during the Festival. In Eliot’s play the sentiments are those of ‘the scrubbers and sweepers of Canterbury’, and their praise is expressed ‘Even with the hand to the broom, the back bent in laying the fire, the knee bent in cleaning the hearth … The back bent under toil, the knee bent under sin, the hands to the face under fear, the head bent under grief,’ but here in the Festival that total and conscious praise is expressed by hands, minds and voices in the liturgy itself, and particularly in its music.

In the twenty years since the Festival began, the nature of formal Christian worship has undergone severe examination even in bastions where its worth was previously taken for granted. In the changes that have taken place it is the new language that has proved to be the greatest obstacle for many lay people, but this is only a single factor in a movement that has resulted in the re-appraisal of every aspect of the pattern and presentation of the liturgy in almost every Christian denomination. In this period the role of the arts in the church has been rigorously questioned. There have always been factions in the Christian church who have mistrusted the splendour of the arts in worship, and the current movement of the liturgy towards the simplicity of the early church has dealt severe blows to long-established traditions of music, language, visual arts and architecture. But while functional buildings and functional liturgy provide an answer that suits many needs – not least the present economic conditions of the church – it is by no means the only solution. The power of praise and prayer expressed in art – be it architecture, painting, sculpture, prose, poetry, drama or music – is no mere decoration, but as essential and realistic a medium of Christian worship in our own time as it was in the days of the building of Gothic cathedrals, the acting out of mediaeval liturgical dramas, or the composition of Renaissance polyphony. Nor can one deny the continuing power of Michelangelo’s ‘Pieta’, da Vinci’s ‘Last Supper’, Donne’s ‘Holy Sonnets’ or Eliot’s ‘Four Quartets’: all these are creative acts of worth-ship in their own right, fruits of the liturgy which can direct and inspire the expression of our own worship today.

The scale of the Festival’s liturgy and setting may not entirely match up to any one of these great works of religious art, but its creative aspiration is no less; and though it may consist of so many smaller parts, its total effect should achieve a unity in liturgy which strives to be an art form in itself. In past years the texts and themes of appointed psalms, readings and prayers have rarely been related to one another, nor have they corresponded to the music in every case. This failure is inevitable given the varying cycles of the church’s lectionary – the biennial cycle of readings, the annual cycle of collects and the thirteen week or monthly cycle of psalms. The compass of this Festival is only a week and its cycle that of the day. I have therefore chosen a theme for each day and the content of all the services is related to it. In endeavouring to achieve this integrated liturgy, I have drawn not only on Anglican lectionaries but also on the new Roman Catholic Office and Missal and the orders of the liturgy of the community at Taizé as well as many other sources. I have also to acknowledge with thanks the help and advice given by Sister Agnes Irene and Sister Cyrilla of the Community of Saint Mary the Virgin at Wantage.

The forms of the services restore the psalms to a meaningful place not only in the Office but in the Eucharist and the Sequence; and they are to be sung not in the unmanageable and disconnected portions, but in extracts that seek through their meaning and poetry to broaden our understanding of the day’s intention. Though the orders of the services appear elsewhere in this Companion, the daily pattern does call for some comment here. Whilst the liturgy reaches its musical and ceremonial highpoints in the daily thanksgiving of the Solemn Eucharist and the exposition of the Sequence of Readings and Music, these are bounded by the three Offices of Matins, Evensong, Compline – services of meditation that rely for much of their purpose and strength on the active participation of all present. Only on the first Sunday at Compline and on Wednesday at Evensong are these choral Offices; for the rest of the week their music is that of the ancient plainsong tones to be sung by all. The pattern of the monastic Opus Dei has long been mirrored in the Festival timetable, but in this, the twenty-first Festival, I hope that the daily cycle will take on new meaning and significance in the cumulative exploration of each day’s theme. And as the Festival reaches its twentieth anniversary, it is splendid to be able to celebrate it with a commissioned set of Proper Anthems for the Feast of Saint Augustine by John Joubert, a composer who has done much to uphold the integrity of liturgical music at a time when mediocrity and mass appeal loom so large as acceptable criteria. It is my hope that the whole liturgy of the Festival will aspire to standards that begin to reflect the Divine Glory. Thus, in the words of Eliot’s ‘Te Deum’:

“We praise Thee, 0 God, for Thy glory displayed in all the creatures of the earth …
For all things exist only as seen by Thee, only as known by Thee, all things exist
Only in Thy light, and Thy glory is declared even in that which denies Thee; the darkness declares the glory of light.”

For all the joy and splendour of the Festival, there are – for those involved in its administration – endless and thankless tasks to be carried out throughout the year. This is true particularly for the Information Secretary; and for ten years Clair Milsted has patiently answered enquiries and sent out material concerning the Festival. Many visitors will remember Edington for her helpfulness over all sorts of problems, and it is only right that I should express my gratitude to her here before she hands over the task to her successor. Practical matters will affect everyone during the Festival week. By annual tradition I remind visitors that Edington is a small village and that this is not a commercial venture, so please be tolerant of any shortcomings in the facilities available. The absence of commerce does not, alas, relieve financial problems. Those taking part in the Festival will have paid for their travel and their main meals, whilst many local people will have provided them with free accommodation: that still leaves expenses exceeding a thousand pounds whose payment relies on your generosity. The Festival has yet to fail to make ends meet, and in the five years I have been Director fifteen hundred pounds has been contributed from Festival proceeds to the church’s repair fund, not to mention the several thousands of pounds raised for the restoration fund in the preceding fifteen years. Grim economic facts make the financial success of the Festival ever more important to the maintenance of Edington’s priory church.