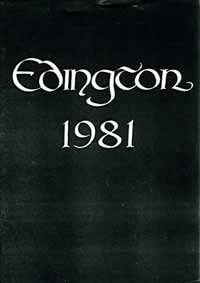 Welcome to the twenty-sixth Edington Festival of music and liturgy. This year we have taken as a general theme the seven Sacraments of the Church, to explore them and if possible see them in a new light; to find in them inspiration for choosing words and music for the liturgy; and as a focus for dwelling on important human and spiritual issues that affect us all.

The Sacraments are descended in one sense from the kind of community ritual which everyone shared in, and which helped people to forget their differences and troubles for a while, and in a spirit of reconciliation bury them in an act of shared worship or celebration. The Sacraments should still be able to fulfil this function. They should be relevant to people and their needs and problems, and be accessible and. easily understood by all who have need of them. But it would be sad if, in making them more accessible, we stripped them of their power to speak to and move people in a deep and unselfconscious way. Maybe one of the disadvantages of the translations of all the liturgical texts into modern language over the past twenty years is that we suddenly realise we are using a lot of rather ordinary words to describe things which, to say the least, cannot easily be dealt with in the manner of an everyday chat, I don’t defend language and structures which, when examined carefully, seemed to have been inaccurate, irrelevant, obscure or untrue, but which had survived under cover of incomprehensibility – no, what emerges rather is basically that we talk too much, use too many words about God and about sacred things, to the extent that God can be easily excluded and one’s awareness of the sacred can be blunted severely.

Perhaps the superficial power of the modern person is partly to blame for this. I can travel at high speeds. I can have bright light in the middle of the night and dispel instantly the power of darkness. I can summon an orchestra by pushing a button, and dispel the powers of silence, loneliness and boredom. If my body tries to tell me I have mistreated it I can swallow a pill to stop me feeling the pain, and if necessary ring for the doctor. These and a thousand other tricks help me to believe I’m in complete control of my life. That’s why pain, illness and death often help people to come closer to an awareness of the presence and importance and beauty and power of God. Certain places and certain times of the day possess special atmospheres and Presence; and many so-called primitive societies still extant are actually far more sophisticated than we are because they are aware of such things. The cycle of monastic offices are and were very finely attuned to the different times of day and night, and celebrate them magnificently. Yet contemplatives are accused of being out of touch with the world; very often they are not. It is western society that is out, of touch. Likewise the different times of year need to be noticed and celebrated and enjoyed. We need to appreciate them; yet the majority of people in Europe and the U.S.A. and many other parts of the world are prevented from doing so m a genuine and consistent way. The observation of God’s nature is impaired by intensive land-use and stock-breeding, the use of chemical poisons, phosphates – short-term, profit-orientated planning and total mechanisation.

Fortunately there are still rural communities, and Edington is one of them. I’ve known the village for twelve years now, but only in Winter, Spring and Summer. Last autumn, however, I was in Edington at Harvest Festival time. The sun was setting as I arrived and I walked down the hill from the Vicarage to the Church. As I went in I was struck by a peculiarly charged atmosphere. The red sun was pouring in from the West, and catching the reds and browns and greens of vegetables, fruit, flowers, corn and. all the other offerings of the village. The smell was incredible. And God was there. Enjoying it all – the harvest offerings, the last of the sun, the smells, the peace of that time of evening, set within the strong and simple architecture of the church, a building 600 years old, but a place with sacred connections going back much, much further. Not a word needed to be said.

A very special occasion for me, the kind of experience that doesn’t happen very’ often. But ever since I first took part in the Music Festival here I have remembered and treasured the Edington Compline as one of those rare experiences; each year afresh I find it comes as a revelation and delight. Matins, too, has a special quality, but it’s very much a daylight office, without a chance to dwell in the soul overnight. The Eucharist is the liturgical centre of the day, while the Sequence in the afternoon or evening is a vehicle for poetry, prose, and many kinds of music, dramatic and reflective. In a daily cycle of offerings we celebrate the omnipresence of God in the most splendid and rich manner possible to us, and this we try to achieve in a spirit of community and festivity.

The structure is very similar to last year’s, with the addition of a new group, Musica Nova (New Music), which performs most of the music specially commissioned and composed for the Festival this year. I believe passionately in the importance of encouraging composers to continue to write for the Church, and not in a way which too heavily restricts them, or makes them write ‘down’ to congregations. Very little of the great music we hear regularly in churches and cathedrals would have been written without the encouragement and financial support Of the establishment of the time, and if church music is to remain alive, composers must create music which is honest and meaningful in its own terms, as well as being able to work within the Liturgy. The main reason I eventually decided (after much heart-searching) to try out this new group is that, given very little rehearsal time, music in an unfamiliar idiom is difficult to perform convincingly and well by a choir, so a small band of specialist singers and instrumentalists should be able to do justice to new music as the Schola do justice to plainsong and the Viol Consort to viol music. Musica Nova is very much an experiment, please listen with open ears to sounds that make use of the wide range of techniques available today but which are no less serious and sincere than older music. Like the Viol Consort, the Vocal Consort specialise in music of the Baroque, but with excursions into other eras, while the Choir covers a representative selection from the main body of liturgical vocal music, beginning with Tallis and Sheppard and stretching to the present day with Paul Trepte’s new Preces and Responses. The liturgy is represented by the Vicar and four priests from very different backgrounds, assisted by servers and readers. The spiritual life of the Festival is their specific concern. If you have comments or questions, please approach them, or myself.