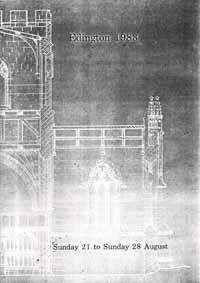 Year by year the pilgrims come. Not in the numbers that they do to the Holy Land, Rome, Lourdes or even Walsingham; nor do they expect a shrine nor a permanent site of religious history; but they come. And there is (in a place as special as Edington) something of the spiritual renewal and refreshment of a shrine, of a place made holy by prayer, and something of the diversity of fellowship found on pilgrimage. The coming may not be so hazardous as that of William Wey, medieval monk of Edington, on his journey to the Holy Land; nor so colourful as that of Chaucer on his way to Canterbury; but Edington has at least something of the inconvenience (if not the peril or discomfort) of pilgrimage.

It may seem odd that the object of the pilgrimage is a liturgical festival not just dominated by music but planned and run by musicians. In an age of liturgical re-formation such an apparent anachronism echoes the medieval Feast of Fools, as – about the church – three Lords of Misrule direct their upstart clerks. But such abrupt condemnation may be equally foolish. What so many have yearned for in the reordering towards pastoral liturgy is that mystery of the Word, expressed with such tantalizingly magical profundity in the Renaissance translations of St. John’s Gospel.

Clarity of translation, comprehensibility of syntax in a modern public liturgy have given it an immediacy which some have mistaken for shallowness. But the new orders and the new texts can be clothed not in a false archaism but with an enlightened use of music; music that is not superimposed but integral to the liturgy, which transcends functional text to become in itself a total music; a music of the Word.

In the Festival at Edington there has always been an attempt to meet liturgical change and spiritual needs within a week of music dominated by regular church musicians. No one more than the participants has been aware of the limited nature of the attempt, but it has been made. For them too, it has been an opportunity to revalue and refresh the musical and the spiritual, and to take that experience afield. Singers who daily lead a regular pattern of worship not only experience new music in a new environment, but have also to listen. Opening ears, opening minds, opening hearts; the fundamental simple roots of Christian prayer are found here, yet curiously in elaborate music and sophisticated liturgy. But there should always be a time at Edington for the music of stillness and silence. Then the prayer of ages radiates from the stonework in the darkness of Compline; or peals through the Eastern lights in the minutes before Matins. Here is the stillness of the early Christian catacombs, of the core of monastic community at prayer (in Taizé as much as in a Charterhouse); the same peace that T. S. Eliot entered at Little Gidding – a liturgical peace, past understanding.