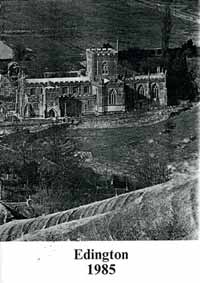 The Edington Festival of Music within the Liturgy August 1985

This year at Edington we celebrate our 30th Festival. To mark this occasion the Festival is delighted to welcome back as our preacher at the Monday morning Eucharist Canon Ralph Dudley, who was Vicar of Edington for the first twenty-five years of the Festival. In addition, the week’s music includes both some specially commissioned new works and the revival of some works written for previous years.

Festival commissions, of which there has been a steady supply over the years, have ranged from hymns and psalm chants to anthems and mass settings, mostly for the traditional scoring of choir and organ, but sometimes involving other instruments and even the congregation. On occasion the Festival has commissioned works for instruments other than the organ specifically for use in a liturgical setting – a feature which re-emerges this year. The two major commissions this year are from Philip Moore and Helen Roe. Philip Moore, Organist of York Minster and a well-established composer of church and organ music, has written a motet on the theme of the Annunciation for the Thursday evening Sequence of Readings and Music. The text combines the ‘Angelus’ with the ‘Ave Maria’. Helen Roe, who has received commissions from many major contemporary music performers and associations, and was recently awarded a Harriet Cohen Memorial Music Award, has composed a series of works for solo oboe ‘Five Edington Monodies’, to act as postludes to the Office of Compline, based on the Marian antiphons which conclude the Office. Also specially composed for this year’s Festival is an Introit by John Barnard, whose hymn tune ‘Edington’ also appears this week. All the main musical items for Wednesday’s radio broadcast are written by past or present Festival participants. Grayston Ives’s ‘Edington Service’ was composed for the 20th Festival in 1975.

Other special features of this 30th Festival include the performance of a medieval liturgical drama and much of Monteverdi’s famous 1610 Vespers music. The liturgical drama first emerged in connection with the recounting of the resurrection story on Easter Day, and the anonymous fourteenth-century, or possibly earlier, drama being enacted on Tuesday evening is of this type, depicting the encounter of the three Marys with the Angel at the empty tomb, and their announcement of the resurrection to Peter and John. Music from Monteverdi’s Vespers will be performed in the non-instrumental version, a manner of performance which Monteverdi himself seems to have envisaged as a possibility when supplying his alternative Magnificat for voices and continuo only.

The theme for the week is ‘The Kingdom’. The phrases ‘Kingdom of God’ and ‘Kingdom of Heaven’ appear throughout the New Testament, though their meaning is not always clear. Jesus himself described the Kingdom as a mystery and tended to refer to it indirectly with parables. However, each day attempts to point us towards a different aspect of the Kingdom. Tuesday’s Sequence looks on from the Easter story towards the Holy City, and Thursday’s takes us from man’s need for redemption to the message of John the Baptist and the coming of the Kingdom with Christ.

My thanks go to all those who have helped with the planning and organisation of this year’s Festival, but above all to Tim and Pippa, who have given so much of their time to Festival matters throughout the year.