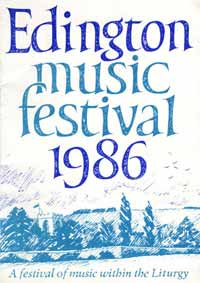 The Edington Festival of Music within the Liturgy August 1986

Welcome to Edington and its annual Festival of church music. Everyone who visits Edington and its beautiful priory church at this time, even to attend just one service, becomes a part of the Festival. Clergy, musicians and congregation all have their roles to play in the Festival community as we worship God together, with heart, mind and voice. The type of worship here at the Festival, with its emphasis on musical excellence, may not be practical or even desirable for the regular religious observance of a small Wiltshire village. But for one week in each year it can offer something special and enriching, briefly catching the atmosphere of the daily round of sung services that would have formed the heart of the religious activities of the original monastic community at Edington, for which the church was built in the late fourteenth century.

The medieval origins of Edington Priory Church are reflected in three particular ways at this year’s Festival. First, the Offices of Matins and Compline follow as near as is practical the orders of service of Lauds and Compline according to the Sarum Rite; this was developed by the secular canons of Salisbury Cathedral in the Middle Ages, and became adopted throughout much of England up to the Reformation. Regular visitors to the Festival will notice some changes in these services, which have previously followed a mixture of the Roman and Sarum rites. Second, the theme of this year’s Festival follows the traditional pattern of medieval theology, as laid out in the ‘Summa Theologica’ of St. Thomas Aquinas. In this we are taken from the origins of the universe right through to the Last Things, with the redeeming work of Christ at the centre. Third, the ‘Revelations of Divine Love’ by Mother Julian of Norwich, in whose lifetime Edington church was built, play a prominent role in the Festival.

Last year the Festival commissioned new music from Philip Moore and Helen Roe. Helen has since gained a Fellowship at Wolfson College, Oxford, whilst Philip’s motet ‘Salutatio Angelica’ has already been heard in liturgical and concert performance outside its original Edington context. This year the Festival has commissioned an anthem from Francis Pott, to be broadcast live on BBC Radio 3. Educated at Winchester and Cambridge and until recently Director of Music at New College School, Oxford, Francis has received a number of composing awards including the Gerald Finzi prize (1981) and awards from Lloyd’s Bank (1982) and Barclaycard (1983). He now works as a freelance composer and pianist.

This Festival exists and continues to flourish thanks to the dedicated efforts of a relatively small group of people who give of their own free time to help plan and organise it. My thanks therefore go once again to those who have assisted with this year’s Festival, particularly Tim Kermode, John Barnard and my wife, Tessa. Since I now bow out of the Festival after my fifteenth year, I would also like to thank all those who have encouraged my participation in the Festival, particularly John Harper, those who have helped me in my last few years as Director, and finally the priests and parishioners of Edington, who have shown me such kindness and support over the years.