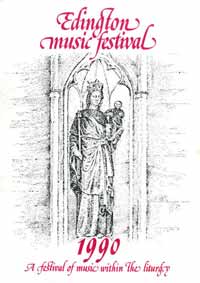 The Edington Festival of Music within the Liturgy August 1990

On behalf of all the participants I would like to welcome you to the thirty-fifth Festival of Church Music at Edington. The theme of this year’s Festival continues the idea of pilgrimage which was explored last year through Bunyan’s ‘A Pilgrim’s Progress’. This year we turn to Dante’s ‘Divine Comedy’ to aid us in our search for celestial wisdom. ‘Why Dante,’ someone asked me whilst I was planning the Festival, ‘surely we are not going to be dragged through those painfully realistic portrayals of the Inferno?’ No, the reason why I chose Dante’s work, apart from the obvious beauty of its poetry and the richness of its ideas, allegories and allusions, was because it portrayed the potential salvation of a man floundering in the petty feuds of earthly life who, like Christ, must descend before he is able to attain salvation. As Dante wrote: ‘I leave the gall, and go for the sweet apples promised me by my veracious Guide. But to the centre it behoves me first to fall.’

Moreover, I chose Dante for his humanism, not that this is sufficient for his redemption. Nowhere is this insufficiency more apparent than when Beatrice takes over from Virgil as Dante’s guide. As Virgil takes his leave of Dante he says, ‘I crown and mitre you lord of yourself!’ In other words Dante has mastered earthly wisdom, but as is made plain by Beatrice’s forceful castigation this is not enough to attain celestial wisdom.

Dante’s humanism is especially apparent as he makes his journey through the inferno. Some of the sins being punished are not necessarily what Dante regards as sinful, instead they are more a reflection of church doctrine. The pity and sense of injustice which Dante expresses are in many ways a powerful critique of the intransigence of contemporary doctrine and the abuses involved in forming it. This is, of course, just as relevant today as it was in Dante’s time, the pronouncements of the General Synod being one particular instance. By dint of the curiously circuitous route to election only those with strong views coupled with a sense of the ‘rightness’ of these views tend to wish to present themselves, resulting in an odious, ecclesiastical gang warfare which ultimately detracts from the excellent work being performed without fuss or publicity at the parish level. Such doctrinal infighting, with all its attendant moral exclusiveness, ignores each individual’s personal relationship with God. Dante powerfully affirms the strength of this relationship when he, or rather Beatrice refers to ‘this noble power known as the Freedom of the Will.’ Elsewhere Dante writes:

‘The spheres initiate your tendencies: not all of them – but even if they did, you have the light that shows you right from wrong, and your Free Will, which, though it may grow faint in its first struggles with the heavens, can still surmount all obstacles if nurtured well.’

The services during the week retain the same format as in previous years, although the Offices of Matins and Compline will be mostly in the vernacular. The theme for Monday’s services (‘Sin and Repentance’) takes its cue from the first canto of ‘Inferno’ where Dante finds himself wandering off the straight path. Both Eucharist and Evensong examine this idea with reference to the Fall of Adam. At the end of the first canto of ‘Inferno’ Virgil appears to lead Dante out from the dark wood through Hell and Purgatory, and Tuesday’s services are based on the theme of guidance. The Eucharist explores this theme by referring to God leading the Jews out of Egypt whilst the Sequence follows the progression of the ‘Divine Comedy’ from misery and helplessness through to the attainment of the heavenly state. Central to this is the Passion: Christ suffered so that His example would guide us to the Kingdom. Wednesday’s theme is ‘Longing’ based on Dante’s longing for his dead lover, Beatrice, who represents celestial wisdom.

The following three days are based on the idea of the Threefold Coming of Christ. Thursday’s theme is the first Advent, represented in Dante by the angel who in ‘Inferno’ comes to unlock the gates of the city of Dis, and stresses the humility of Christ’s coming into the world. Friday’s theme is the Final Coming, depicted at the end of ‘Purgatorio’, whilst Saturday’s theme is the Intermediary Advent, the coming of Christ into the hearts of Christians every day. In Dante this is symbolised by two angels who descend from the Virgin Mary to guard the valley of the Princes. Thus Saturday also pays homage to the Blessed Virgin.

Many people have helped in the preparation for this year’s Festival, and my thanks go to Hilary Dodds, Tim Kermode, John Barnard, Paul Proudman, Revd. Dr. Alvyn Pettersen, Dr. Susan Rankin, and to many others. This will be Peter Wright’s last year as Director of the Nave Choir and I would like to take this opportunity to thank him for all the marvellous and inspiring work he has done for the Festival over the years. Many of you will have also heard of the death in March of Ralph Dudley, Vicar of Edington from 1954 to 1981. The debt we all owe to Ralph, who with David Calcutt established the Festival, is immense and without his enthusiasm, dedication and sense of liturgical and musical propriety the Festival would not be the unique event which it undoubtedly is. Paul Rose has written a fuller appreciation of Ralph’s work elsewhere in this booklet, but on a personal note Ralph’s support and advice when I became Director of the Festival were invaluable. He will be sorely missed.