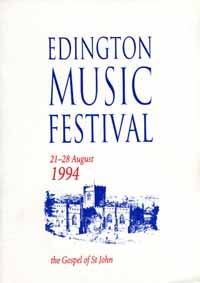 Welcome to the 1994 Festival of Church Music at Edington. I hope that you enjoy its unique blend of liturgy and music and find a spiritual haven from the pressures of the busy world.

The theme for this year’s Festival is the Gospel of St John. St John, more than any other Gospeller, is determined that we might have the evidence of a reliable witness so that we might believe.

“He who saw it has borne witness – his testimony is true, and he knows that he tells the truth – that you may also believe.”

“This is the disciple who is bearing witness to these things, and who has written these things; and we know that his testimony is true.”

“Now Jesus did many other signs in the presence of the disciples, which are not written in this book; but these are written that you may believe that Jesus is the Christ, the Son of God, and that believing you may have life in his name.”

His message is vital, namely that in Christ God became flesh and dwelt among us to bring salvation. It is a spiritual Gospel. John is concerned to bring out the significance of all that Christ did and said. The things that he did were ‘signs’, and the meaning of them, hidden at first, could be understood only after his glorification; the things he said had a deeper meaning not perceived at the time but understood only after the Spirit had come to ‘lead’ his disciples.

The themes for the days reflect several elements of the Gospel based around Jesus’ description of himself with the words ‘I am’: ‘the light of the world’, ‘the bread of life’, ‘the good shepherd’, ‘the way, the truth and the life’ and ‘the true vine’, but also including an investigation into the nature of the Passion and Resurrection (Saturday and Sunday).

As always there is a broad selection of music throughout the week, from the earliest chants to the present day. I am particularly pleased to be performing a new set of responses by Francis Pott. Vespers will be sung again this year on Thursday evening and I have made some changes to the sequences which I hope will prove pleasing.

I cannot let this year’s preface pass without mention of Neil Heavisides. I must be honest and say that it was with some sadness that I learned of Neil’s appointment as Canon Precentor at Gloucester Cathedral. Neil has been, and will continue to be, a fundamental part of the Festival. His gentle but firm guidance was something which I have found invaluable in my first years as director and I regard it as a privilege to have worked with him. We are all delighted that he is available to preach on Friday evening this year and hope that we will continue to see him (in spite of duties with another Festival which takes place during August) and that he will always remember the affection and esteem in which he is held here at Edington.

This year also sees the fiftieth anniversary of the ordination to the priesthood of Brother Reginald. We wish him well and thank him for his devoted service. Last year Maurice and Eileen Bird also celebrated Maurice’s fiftieth anniversary of ordination. We share with them in their joy and thank them both not only for their ministry when resident at Edington but also for being able to join with us during the Festival week once again.

There is the usual list of thanks for help throughout the year which has been a particularly difficult one for me. I am very grateful for the patience and hard work of many. May I thank especially Patrick Elwood and Janet McMullin, Michael Jones and Paul Rose for helping to co-ordinate the Festival in the absence of a parish priest, John Barnard, Christine Laslett, Gilbert Green and John d’Arcy, David Trendell, Jeremy Summerly and Peter McCrystal and as usual all of the villagers of Edington and the host families in the surrounding areas.