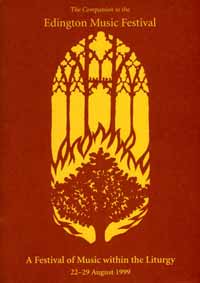 ‘Shine as a light in the world to the glory of God the Father.’ Baptismal Rite

Welcome to the 1998 Edington Festival of Music within the Liturgy, whether you are here for the whole week or just one service, a regular worshipper or on your first visit to the Festival.

At the head of this introduction are two very familiar quotations that summarise, on the one hand, a sense of what Edington represents, and on the other the theme for this year’s Festival. Edington provides us with an opportunity to absorb the stillness and serenity of the Priory and its surrounding area, enjoy the splendour of a wide range of music performed by expert musicians, and reflect on the rhythm and ritual of the daily liturgy. The week gives us time to look around us and listen – it is extraordinary how much we fail to see and heir in our everyday lives. The play of light into this great building as it changes with the passing day is in itself an evocative visual metaphor.

In choosing ‘The Light of the World’ as this year’s theme I wanted to explore not only the nature of this light, but also our response to it. T.S. Eliot’s poem ‘The Journey of the Magi’ (part of Thursday’s Sequence) portrays the Wise Men searching for the light, but finding it in terms of death – their death (learning to leave self behind). Samuel Taylor Coleridge (also featured in the Sequence) describes the reaction to light another way in his notebooks as “the Light purifying, and the purified receiving and reflecting the Light, sending it off to others, not like the polish’d mirror by rejection from itself, but by transmission thro’ itself”.

This concept is most clearly delineated on Saturday, but it is an underlying thread throughout the week, which begins with us looking for the light, and finding it in life and love. I am particularly pleased that Paul Wigmore and John Barnard, responding with their customary imagination and liturgical sensitivity, have taken up this dual thrust to the theme in the new hymn that they have written for Wednesday’s broadcast. Monday is also the Feast Day of St Bartholomew, and we are reminded that the Apostles were those who had looked for the light and found it, and now serve as examples for us (“The lights that rose on earth for all”).

Tuesday deals with Creation (and love in creation) whilst Wednesday considers the Word Incarnate, a light for all. On Thursday we progress through the manifestation of this Light (Epiphany and the Presentation) to Friday’s discovery of life and light out of the darkness of death. Thursday’s Sequence also covers similar ground within one service – from seeing the star to rejoicing in the resurrection of the Good Shepherd. Having already hinted at ‘Lux aeterna’ with a performance of Ligeti’s sixteen-part setting on Friday evening, Sunday is a celebration of eternal light, including ‘Plebs angelica’ by Sir Michael Tippett, whose death earlier this year marked the passing of a colossus on the British music scene.

Light out of darkness has been a consistent source of inspiration to artist Tom Walker, and I am extremely grateful to him for the beautiful image which graces the cover of the Festival literature, and glad that he will be exhibiting work during the Festival. I am also delighted to be able to continue the tradition of encouraging new church music with the commission of a new Magnificat from John Streeting. This is the third piece John has written for the Festival, and it is scored for the nave choir and organ. It thus makes an attractive pairing with his highly effective Nunc dimittis written for last year’s broadcast, and sung again this year by the Consort. It is also a pleasure to welcome John as a member of the Festival clergy. In 1996, Ruth Byrchmore wrote two motets based on Latin texts, and having repeated one last year, the Consort will be singing the other one on Saturday morning this year.

In addition to thanking those whose notable artistic contributions I have already mentioned, I would like to thank most warmly the three choir directors, David Trendell, Jeremy Summerly and Andrew Carwood, and organists Robert Quinney and Julian Thomas. Last year we said farewell to Peter McCrystal, to whom the Festival owes a considerable debt of gratitude for his long-standing loyalty and interest – we hope he will keep in touch and remain a close friend of Edington. I am especially thrilled that Andrew Carwood, having directed the Festival with such distinction for six years, has stayed on to succeed Peter as director of the Schola. I have greatly valued Andrew’s wise guidance in my first year as Director. All those associated with the Festival during his tenure as Director have much to thank him for: I particularly admire the imagination and flair which characterised his choice and elaboration of themes. I am very much looking forward to Thursday’s Sequence, when Andrew will take the solo part in Leighton’s cantata ‘Crucifixus pro nobis’ as we remember the tenth anniversary of Kenneth Leighton’s untimely death in 1988. We are very fortunate that the BBC will be recording this service for future broadcast, thus restoring the highly prized second broadcast.

There are a number of anniversaries commemorated in the choice of music this week, from Parry and Vaughan Williams to Ligeti (75 this year), and that giant of Spanish sixteenth-century music, Tomás Luis da Victoria. We have also selected music appropriate to the feast days that fall during the week, by Tallis, Morley and Mozart.

No Festival can be a success without diligent administration, and I greatly appreciate the time and care taken over the planning and execution of this Festival by Patrick Elwood, Janet McMullin, David Belcher, John Barnard, Adrian Hutton, Christine Laslett, Pat Didcock, Gilbert Green, Jeremy Moore and John d’Arcy, as well as thanking most sincerely the host families in the village and surrounding areas. Patrick deserves a special mention for his cheerful efficiency and attention to detail.

I close with a prayer by a successor of William of Edington as Bishop of Winchester, Lancelot Andrewes: