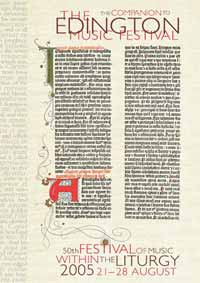 Welcome to the 50th Edington Festival of Music within the Liturgy. It is a wonderful testament to the many people who have been involved over the years that the festival lives on and indeed flourishes at this time. It is an enormous privilege to be directing the festival in this special year, and I am sure it will be a truly memorable week.

The theme for this year’s festival is ‘Discipleship and the Kingdom of God ‘. In choosing this, I have deliberately sought to build on last year’s theme, the monastic Rule of St Benedict. In it, Benedict encourages his followers to strive for Christian values both as individuals and also in the community. As we come together for another festival, I hope we will have the opportunity, through music, liturgy and the spoken word, to explore what we mean by Discipleship, in particular our own personal response to the Christian message, and to look at our relationship with God and his Kingdom.

The week begins with The Call to Discipleship, allowing us to think about our own response to Christ’s call to follow him, and giving us space to reflect upon our Christian journey. Following on from this, it is important to pause and reassess what we actually mean by Belief: so much of high Anglican worship is routine – one of its real strengths, in my opinion – that it is easy to stop thinking about what it is we believe. I am delighted that our guest preacher this year, Canon Bruce Ruddock (Precentor of Peterborough Cathedral) will preach on this theme at the Eucharist on Tuesday. As we celebrate St Bartholomew’s Day on Wednesday, we consider the significance of The Apostles and their early role in the mission of the Church.

In the second half of the week, as we turn specifically to consider the Kingdom of God , various phrases from the Lord’s Prayer provide the stimulus for further thought. It is often without thinking that we say ‘Thy Kingdom come’, but what does that mean and, perhaps more importantly, what does it mean for us? So on Thursday we think about Preparing for the Kingdom, with its echoes of Advent and forethoughts of the Second Coming. On Friday, we are challenged by the prospect of Preaching the Faith, something which may seem doubly hard in an age of scepticism and un-belief. It is one thing to follow as disciples, it is another altogether actually to be involved in the promotion of the Gospel.

Salvation through Christ, on Saturday, gives us the opportunity to ponder awhile the ultimate sacrifice that Christ made for us all by giving up his life for us on the cross. I have deliberately chosen this theme to fall on the day of our anniversary celebrations because it seems so central to our purpose in the worship which we offer. Finally, as we prepare to go out once again into our day-to-day lives, we are challenged on the final Sunday by that line which we so often say in the Lord’s Prayer: Thy will be done. We are challenged not only to believe, but also to do God’s work in everything we do.

Although this is, of course, a very special year, we have sought not to lose sight of the reason for the festival – to glorify God – since that is what makes Edington unique and what draws us all to take part in it. Thus you will see that the pattern of daily worship is still at the heart of the festival week. The only slight change to the pattern is the inclusion of a Sequence of Music and Readings on the Saturday evening as an opportunity to celebrate our anniversary with a number of former festival members augmenting the choirs, tackling repertoire which would not comfortably sit in the context of Evensong.

I am delighted that, through the generosity of the Festival Association, we have been able to mark the 50th festival with a special commission from the highly esteemed composer Judith Bingham. Listeners to Radio 3 will be familiar with her many compositions which are regularly performed, and we are delighted that she has agreed to write a set of Evening Canticles for us. The ‘Edington Service’ Magnificat and Nunc dimittis will receive its first performance at Evensong on Tuesday, and will then be broadcast live the following day on BBC Radio 3.

In addition, we also have a number of other recent compositions this year, including a special anniversary hymn (to be sung on Saturday evening) with a wonderfully apposite text by Paul Wigmore and tune by John Barnard; another fine anthem, Vidi aquam, by festival organist Matthew Martin; and works by John Streeting and David Buckley. It seems most appropriate that we should continue to encourage and explore such new compositions, as this has been a constant feature of the festival over the past half century.

Of course, 2005 is not just our anniversary! This year we also celebrate the 500th anniversary of the birth of Thomas Tallis and the centenary of the birth of Sir Michael Tippett. As you will see, Tippett’s five moving and expressive negro spirituals from A Child of our Time form the backbone of the Thursday evening Sequence. Tallis’s music too, in its many different styles, features prominently throughout the week, in particular with the sublime forty-part motet Spem in alium at the Saturday Sequence, and the rarely performed Missa Salve intemerata at the Wednesday morning Eucharist.

As always, there are many people that I need to thank for their invaluable advice and assistance throughout the year, especially Peter Roberts and Becky Minogue our administrators, the choir directors Robert Quinney, Andrew Carwood and Jeremy Summerly, and organists Matthew Martin and Chris Totney. Obviously, much of the work of preparation goes on behind the scenes and I would like to pay tribute especially to Nick Flower, John Barnard, Christine Laslett, Joanna Robertson, Nicholas Buckman, John d’Arcy, Allan Edwards, and Reverend Dr Graham Southgate for all they do to make this festival so special. Finally, I would like to express a huge debt of thanks to the whole church community and all the villagers of Edington and the surrounding area, without whose support and warm welcome the festival could not possibly take place. Here’s to the next fifty years!