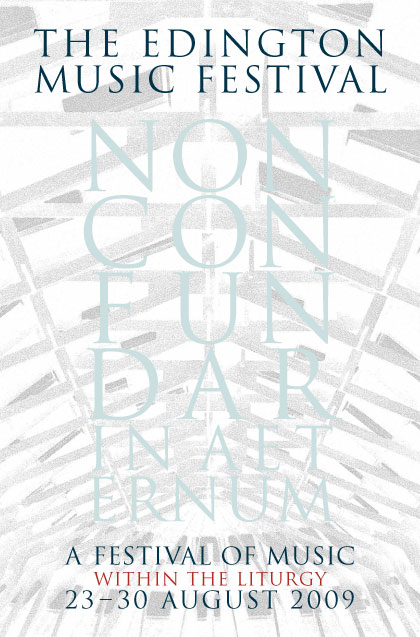 Welcome to the 2009 Edington Festival of Music within the Liturgy. The theme of this year’s festival is that great hymn of praise, the Te Deum laudamus. During the course of the week we will explore through music and the spoken word some of the features which make it so central to our Christian lives. Since many people may only occasionally have the privilege of attending choral matins, or perhaps hearing a Te Deum at a festal evensong, it seemed only right that this festival should put it firmly back into the spotlight! That said, it is not going to be a week full of settings of the Te Deum: rather, each day we have sought to focus on one particular aspect of the text.

In some ways, the hardest part of planning the festival was deciding which of the possible themes to include as there are so many from which to choose. In selecting those that I have, my aims were twofold: first, that by the end of the week we will have experienced a range of ideas, music and liturgy; and secondly, that we might feel encouraged to look afresh at other canticles and well-known texts, considering them for what they actually say, rather than simply allowing them to be routine.

Throughout much of the Bible, Angels play an important role in preparing people for what God wants them to do, so it seems appropriate that we should begin our festival thinking about them. As well as their role as messengers, though, they also show us things about one another or help us to see people in a different way. On Tuesday, our examination of the theme of Sin is not so much an opportunity for us to wallow in our sins, but instead allows us to be aware of how we should seek God’s forgiveness for them. Thus on Wednesday, in Redemption, we consider the central Christian message of salvation won through Jesus’ suffering on the cross.

Resonances with the Ascension are clear on Thursday in the King of Glory, and I hope the Sequence of Music and Readings that evening (including two non-biblical readings) will further enhance our appreciation of this important piece of imagery. On Friday we return to the theme of Judgement (regular festival-goers may sense we have covered some of this ground before, but there is so much good music for it, and I feel it is an important aspect of the balance of ideas in the Te Deum text). On Saturday, we consider Trust, not only our trust in God but also, by extension, an opportunity to examine our beliefs and our faith, before completing the week with a brief exploration of Majesty and, in particular, Christ’s kingship.

As always, we have tried to cover as wide a variety of repertoire and styles as possible during the course of the week whilst remaining true to the liturgical demands of the festival—this is, after all, what makes the Edington festival unique. As well as a small selection of pieces by composers whose anniversaries fall this year, including Mendelssohn, Purcell and Haydn, there are both familiar favourites and some less well-known pieces. I would particularly like to mention the Friday evening Requiem at which we will be combining the plainsong Missa pro defunctis with the six movements of Herbert Howells’s Requiem (a mixture of Latin texts and English psalm settings).

Through the ongoing generosity of the Festival Association, we are able once again to hire a chamber organ to accompany some of the choral items, and also to continue our significant tradition of commissioning new works. We are especially delighted this year to have been able to commission an anthem for the Nave Choir from Dr Francis Jackson, undoubtedly one of this country’s most important church musicians and composers. His setting of Edmund Spenser’s text Most glorious Lord of Lyfe! will receive its first performance during the live broadcast of Choral Evensong. Regular listeners to BBC Radio 3 will know that, since our last festival, this service has returned to its traditional Wednesday afternoon slot, which means we no longer need to record on Thursday for transmission four days later.

The spoken word is, of course, as much a part of this festival as the music, so it is a great pleasure to welcome back the Right Reverend Humphrey Southern, Bishop of Repton, to preach on Friday evening. He is well known to many both in the festival and locally, what with his family connections here, his time as a priest in the Salisbury diocese and having been a member of the festival clergy team in previous years. Indeed, we are indebted to all the clergy who ensure that Edington’s wonderful mixture of music and liturgy is so successfully maintained.

There are many people whom I need to thank for their invaluable advice and assistance throughout the year in bringing the festival to fruition, especially our festival administrator Peter Roberts, choir directors Andrew Carwood, Matthew Martin and Jeremy Summerly, and organists Ashley Grote and Chris Totney. Obviously, a large part of the organisation happens behind the scenes and in advance of the festival week, so I would like to record here my thanks to everyone in this capacity, including Nick Flower, John Barnard, Christine Laslett, Emily Roberts, Adrian Hutton, Sheila Miles, Robin Wilson, Clare Norfolk-Brown, John d’Arcy, Allan Edwards, Peter Norfolk-Brown, Julia Taylor and the Reverend Dr Graham Southgate. Finally, thank you to everyone who participates in the festival for making it what it is, and perhaps most of all to the church community and the villagers of Edington and the surrounding area, without whose support and warm welcome the festival could not happen at all.