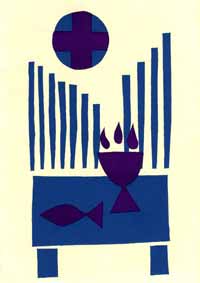 The first festival was held at Edington in August 1956. Broadly speaking it was founded to give former choral scholars and choristers a chance to sing daily choral services again for three or four days. Edington was an obvious place to put this into practice. The Priory Church had been founded and built by the Order of Bonshommes with the primary intention that daily choral services should be sung there. In holding the Festival there a tradition that had been lost was in part revived. From the very beginning it has had the generous support and encouragement of Ralph Dudley the Vicar and his parishioners, many of whom have made lasting friends thereby. The first Festival was a success and it was decided to hold one each year.

The reasons for the founding and the success of the Festival in 1956 remain today, but ten years have seen a change in its pattern and emphasis. I would point out four of these changes and developments in order to give an idea of the structure of this year’s Festival, and to look ahead to future years.

In the first place the Solemn Eucharist is established in the timetable as the central service of the day. Numerically the congregations do not yet reflect this, but I hope that the Festival will continue to attract more and more people from farther afield who will stay in the neighbourhood for as much of the week as possible, and be with us for more than the office of Evensong.

Secondly, the number of people taking part has increased year by year. In 1961 the Plainsong Choir was started. This not only allowed a daily sung Eucharist but it meant that a wider variety of people could be included. The Plainsong Choir was originally created to allow as many people as were willing to join in much of the singing. However the difficulties of plainsong were underestimated. All but syllabic plainsong needs quite as much concentrated practice as does any polyphonic music. So this year the music of the Solemn Eucharist and Evensong is shared by the two regular choirs, but the music of Matins and Compline each weekday is to be sung by all present. I hope that all visitors will join in these services. Many people have found the short and simple service of Compline a fitting end to the day during the Festival. This year there will be a few minutes silence after Compline during which a Bach chorale prelude will be played.

Thirdly, the scope of the music has broadened. This year it has been chosen so that each service is as far as possible an artistic unity representing a period or style of composition used in conjunction with plainsong within the framework of the 1662 liturgy. So often a service otherwise beautifully balanced is marred by a short response or even a hymn that is quite out of context. Short notes on some of the music being sung and played this year are included in the Companion.

Over the past ten years the Festival has done something to revive old compositions worthy of a place in the cathedral repertoire, and more important, it has commissioned new works. This year Simon Preston who has taken part in and worked hard for Edington in past years, is unable to come; but he has written music for the psalms for Wednesday evening. Secondly, Philip Tagg who on leaving Cambridge is training to teach music, has written a set of Preces and Responses for the same service. I hope that the Festival will continue to commission new works for, if the church’s music is to remain alive, cathedral, collegiate, and other choirs have a duty to retain the interest of contemporary composers by commissioning their work.

Finally, the first ten years have had an unforeseen effect on many who have been associated with the Festival. The idea that the Solemn Eucharist should be the focal point of the day rather than a choral Evensong, the idea that the ceremonial should be as well rehearsed as the music, the idea of working within the complete Opus Dei of Matins, Eucharist, Evensong, and Compline, the idea of attempting to tackle the liturgical problems of music in which a congregation cannot participate, these ideas did not occur to members of the first Festival. David Calcutt has been wholly responsible for incorporating them and many others, and it has not been without considerable opposition. He has made the Festival what it is, and thanks are due to him from all those who have enjoyed taking any part, actively or passively, in the Edington Music Festival at any time during the past ten years. I trust that the ideas which he has fostered will continue to grow, and in particular that we shall be in a position to shed more light on the question of blending elaborate music with a liturgy under revision.

“It hath been the wisdom of the Church of England, ever since the first compiling of her Publick Liturgy, to keep the mean between the two extremes, of too much stiffness in refusing, and too much easiness in admitting any variation from it.” So reads the Preface to the Book of Common Prayer. The liturgy of the Eucharist that has evolved with the Music Festival at Edington remains firmly based on the Book of Common Prayer, and this being a music festival, music in the liturgy is of prime importance. The result is that the congregation is allowed little or no active participaton. This is not difficult to defend, but the time has come to consider such a position in the light of the teaching and trends of the Liturgical Movement.

How far back the beginnings of the Liturgical Movement can be traced is a matter for speculation. But it is interesting to recall the words of Pope Pius X some sixty years ago: “The principal office … (of sacred music in the liturgy) … is to clothe with suitable melody the liturgical text proposed for the understanding of the faithful”. Hence “its proper aim is to add greater efficacy to the text … It must be considered a very grave abuse when the liturgy in ecclesiastical functions is made to appear secondary to, and in a manner at the service of the music, for the music is merely a part of the liturgy and its humble handmaid”. (‘Moto proprio’, Nov. 22, 1903).

The present Vatican Council has spoken at length on the subject, strongly and with miraculous results: “holy mother Church desires to undertake with great care a general restoration of the liturgy itself … In this restoration, both words and ceremonies should … express more clearly the holy things which they signify; the Christian people, so far as possible, should be enabled to understand them with ease and to take part in them fully, actively and as befits a community … The rites should be unencumbered by any useless repetitions; they should be within the people’s powers of comprehension and normally should not require much explanation”. (‘Constitution on the Liturgy’, pars. 21 and 34).

One contemporary liturgist expresses himself as strongly as this; “If the people of God are to be given the parts of the liturgy which belong to them by right, then we must provide them with music which raises no barrier to their easy participation”.

Judged by this criterion it seems clear that the Liturgical Movement would consider almost all Gregorian Chant “unliturgical ” and most polyphonic music also. There would be no place for a trained choir. Such fine music as the masses by Dunstable, Taverner, Victoria, and Stravinsky would be ousted from their rightful context to become fossilized in the concert hall. What will take its place? If the criterion is to be music which raises as low a barrier as possible to participation by the greatest number of people, it will be at the best banal, and likely to drive at least the intelligent musician away from the church.

The Liturgical Movement is looking backward beyond the Middle Ages in its efforts to bring the liturgy into line with present day needs. To a certain extent musicians have been blamed for the “liturgical chaos” of today’s liturgy, built as it is on the splendour (musical and ritualistic) of the medieval church rather than the simpler ideas of the pre-medieval church. Perhaps the Edington Music Festival has shown over the past few years that many people find great spiritual value in a splendid liturgy. If this is so then there should be a place for such a form of worship. A letter about the Festival, quite unsolicited, concluded, “It is easier in non-participatory worship to be led straight to Christ; there are less distractions of hymn-books, prayer books, or tuneless neighbours. One is able to wash oneself in the art and through it travel straight to the cross. Here is the sole justification for art or beauty of any kind in a church, that it is a mediator between God and man.”

Much of what the Liturgical Movement is saying is obviously directed towards the parochial organisation, but despite its apparent condemnation of our type of liturgy I am sure that it might be used to the great benefit of a cathedral organisation or a music festival. A revised liturgy which took the congregation, the choir, the servers, and the priests into due account could be a very fine thing. Such a liturgy has been prepared for the Festival under the guiding hand of Dr Tom Akeley, now Professor of Theology at Windsor University, Ontario. Unfortunately the Bishop felt that he could not give us his authority at present to use it, but I hope that we shall be more fortunate another year when we are clear what is and what is not permitted under the Prayer Book Measures Bill.

Meanwhile let us realize in agreement with the Liturgical Movement that music is the handmaid of the liturgy. It is and always has been an integral element in Christian worship, and any liturgy which abandons music loses its most loyal and noble servant.