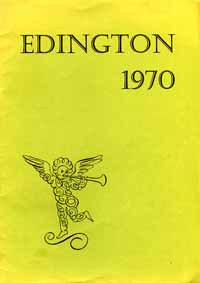 The Festival extends a warm welcome to all those who come to Edington during this week. This, the fifteenth Festival, has much the same shape and form as previous Festivals. The Choir directed by Simon Preston, and the Consort directed by Godfrey Salmon, sing at the central service of each day, the Solemn Eucharist, and at the evening service. Both choirs share the music of the first service of the Festival, Compline on Sunday; on other days this is sung by all those present.

Although the Festival’s structure is essentially the same as in previous years there are a number of innovations. Two new works by young composers have been commissioned: a set of anthems by Patric Standford for the Solemn Eucharist on Friday and a set of anthems for the Solemn Eucharist composed by Christopher Brown. The Festival has been able to include two groups of instrumentalists: a string quintet to play during the Evensong on Wednesday (now to be broadcast at 4pm), and a brass ensemble to play during the service of Readings and Music on the Saturday and during the final Solemn Eucharist on the Sunday.

Each year’s Festival has its own innovations, some become a part of future Festivals, some are dropped, some reach a wider audience and influence other people and other places. The emphasis on the Eucharist as the central service in each day’s worship, the commissioning of new music, the revival of a number of works seldom performed in their liturgical context, and an acknowledgement of the place and value of services in which the congregation do not participate audibly; these can be seen as contributions that the Festival has made to the wider field of the use of music within the Church’s liturgy. The Dean of Manchester recently suggested that the task of a cathedral was ‘to go on obstinately, beautifully, and relevantly, with the public worship of God’. One can see this Festival as having a similar task, and furthermore because of its resources, musical and otherwise, that it can encourage other people in other places to do likewise.