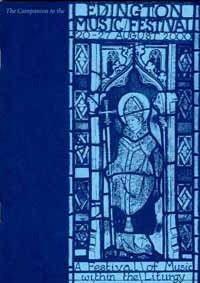 Welcome to the Edington Festival of Music within the Liturgy for the year 2000. Whatever one’s views on where the millennium really comes, and whether this is really a great birthday for the Church, it is clearly a momentous milestone, and not least for Edington – the forty-fifth festival and the year that sees the launch of the Festival Association.

‘0 worship the Lord in the beauty of holiness!
Bow down before him, his glory proclaim.’

I find these words from the well-known 19th-century Epiphany hymn by J.S.B. Monsell (and also familiar from Psalm 96 and settings by Elgar and Wesley) particularly poetic and meaningful when it comes to considering worship at Edington. The beauty of holiness has a special resonance for all those of us lucky enough to be worshippers at this unique Festival, where we are able to rejoice in, celebrate and relish the quality of our liturgy and worship – its beauty and holiness.

The word ‘liturgy’ is derived from two Greek words (‘leitos’ and ‘ergos’) which translate as ‘public action’. Thus we have acts of public worship, made up of praise, penitence, prayer and thanksgiving. Canon Neil Heavisides spoke eloquently and movingly about the life and work of Ralph Dudley on Friends’ Day at last year’s Festival, and alluded to Dudley’s clear vision of liturgy as ‘the people’s work’, where not just music and the spoken word but also deportment was an art. ‘Worship’ is a word that can be traced back to the Anglo-Saxon ‘worthship’: an honouring of God, when earth and heaven are linked, and we offer back to God the gifts He has so richly bestowed on us (the fruits of creation, the word, music and the other arts). In the words of the Bishop of London, “Human beings are liturgical animals. It is of the profoundest significance to discern who or what we are worshipping.” Once we have been afforded a glimpse of beauty and holiness, we are continually striving to see it again.

In his excellent article for our first Festival Association newsletter, Jonathan Arnold discusses in detail a theological, historical and liturgical understanding of the person of Christ and the interdependence of worship and faith. This year’s theme traces different aspects of Christ (child, teacher, healer, friend of sinners, suffering servant, king and cornerstone) under the title ‘What think ye of Christ?’ In choosing this title I wanted to reflect on the progression of Christ from Child to King and the paradox that he is both at each stage: ‘born a Child and yet a Ying’. Two words in particular come to the fore in parallel with this life cycle: Christ’s authority as God’s agent and his status as servant. His own identity in both depends on his own interior development as a disciple himself, such as his experience of the Temple. Thus the fundamental question ‘What think ye of Christ?’ makes most sense when linking our way of discipleship to the pattern of it he interpreted himself. One also thinks of the Gospel of the Invitation to his disciples at Caesarea Phillippi – “who do men say that I am?” – when, after various false starts and a rephrasing of the question, Peter impetuously blurts out the reply, “The Christ of God”. Christ is identified not just as the Son of God, but as the Son of Man. In his fascinating book ‘Jesus in his lifetime’, John Marsh alerts us to the difference between the Christ of the Church’s faith (‘Son of God’, ‘Lord’) and the nature of Jesus in his lifetime, where the title which he is reported to have used of himself (‘Son of Man’) “bears none of the characteristics of deity that the Church has ascribed to him in its doctrine”. In a recent sermon in St Paul’s Cathedral, the Bishop of London suggested to the congregation that there is a distinction between today’s obsession with image as against what marks out Jesus – his character, giving depth and meaning to existence.

After a journey through Christ’s life during the week, we conclude on Sunday with the Cornerstone. I was keen to finish with this ascription as it emphasises a vision of our own call to discipleship, and sends us away from Edington with this challenge ringing in our ears and with our own sense of commissioning. I have vivid memories of Andrew Carwood achieving a similar symmetry but in a different context with his theme based on George Herbert. As ever, if you want a concise and thought-provoking survey of this year’s theme, you will find it in Paul Wigmore’s beautiful hymn that he has written for this year’s Festival, with a lovely tune by John Barnard. Their contribution to the spiritual and liturgical thrust of successive Festivals is uniquely valuable, and we thank them for this. 1 am also glad that we will have an opportunity to use their hymn from 1998, ‘New light has dawned’, and also to sing one of John’s most celebrated tunes ‘Guiting Power’ – a fitting tribute to John during his thirtieth Festival.

Amongst other things, the last few years have signalled a change in our lectionary with the winding-down of the use of the Alternative Service Book themes and a wider choice of themed and non-themed readings in the Revised Common Lectionary. I must confess that I became rather fond of the ASB themes, and they were often a considerable help in choosing music, although maybe I would have thought differently were I pastor or preacher! Of course, we at Edington have known about the value and inspiration of themes for longer than the ASB has been around, in that they lend focus, definition and a sense of purpose and quality to our worship. This spirit has informed my construction of the progression of this year’s theme. It will be interesting to see how the RCL fares by comparison.

‘Truth in its beauty, and love in its tenderness,
These are the offerings to lay on his shrine.’

I mentioned earlier the questionable nature of the millennium/year 2000. The vast majority of organisations have, nevertheless, seen it as an occasion for a veritable outpouring of celebration, and there have been two highly significant and well-publicised artistic events this year that I would like to consider. The first was the very successful, hugely well attended and much talked about exhibition at the National Gallery, ‘Seeing Salvation’. Visual art has been for centuries a means of exploring the universal themes of love, suffering, hope and death in humanity’s never ending quest for truth (‘truth in its beauty …’). The figure of Christ, as interpreted by different artists, was depicted in numerous guises in this exhibition, although it was intriguing to perceive the strong focus on suffering redeemer – rather less on the triumphant Christ (and one is perhaps aware of this same dominance in our liturgy). Christ is King of all creation and of the whole process, and not just of the Righteous – and unrighteous – in judgment, and will take forward the Kingdom to the whole cosmos.

In the Passion narrative, at the height of the interrogation scene, Pilate asks, “What is truth?” The second major artistic project I would like briefly to mention is the staging of J.S. Bach’s St John Passion by English National Opera earlier this year. This production commemorating the 250th anniversary of the death of J.S. Bach. as well as the millennium, gave one much to think about afresh. For me, it was particularly a re-evaluation of the Evangelist’s role, and a feeling that you as an audience were so closely involved in the unfolding drama – a greatly increased sense of personal responsibility and (on a grand scale) the concept of liturgy (and the passion) as drama. Deborah Warner’s direction was for me at its best when it was at its most subtle. Thus the continual presence of the Evangelist, as storyteller, commentator or sympathiser gave the sense of him being our representative, in amongst the events of Holy Week, and lent his role a particular and moving poetry.

On the Wednesday of the Festival, we have our own celebration of J.S. Bach, with the broadcast of his motet ‘Der Geist hilft’, amongst other Germanic church repertoire; his organ music also features regularly during the week. Our music list also contains a healthy representation of Continental renaissance music and a pleasing selection of modern English music, along with well-established church music from these shores from Gibbons to Stanford. Picking up on the inspirational liturgical and musical planning of my predecessors, I have attempted to allow other musical themes to form during the week, such as the sequence built around predominantly sixteenth-century English music, and, after the success last year of the 1589 motets, the inclusion this year of a couple of motets from Byrd’s Cantiones Sacrae of 1591. Finally in this regard, I am delighted to be able to continue our policy of commissioning new music with the first performance of two settings by Andrew Johnstone of lyrics from the ‘Red Book of Ossory’. I am also grateful to Tom Walker for the wonderfully inspiring artwork which he has once again provided for the Festival literature.

Having explored a number of artistic angles to this year’s Festival, one has to acknowledge that such artistic endeavours are impossible without a huge amount of administrative support. In a history of the Festival written in 1980, former director John Harper refers to the Festival’s “considerable musical prestige and administrative complexity”. As time goes by, of course, matters become ever more complex, and this year has seen the launch of the Festival Association, with added work involved there. I am indebted to Michael and Joy Cooke and to Jonathan Arnold for all their help in bringing these plans to fruition. Equally, I am thrilled by the effortless way that Peter Roberts has assumed full responsibility this year as Festival Administrator. Last year was the end of an administrative era, when we bade farewell to Dermot Coleman, Janet McMullin and Patrick Elwood, who had all done so much over the years, and really put themselves out on the Festival’s behalf. That the transition to the reign of Peter Roberts and Clare Dawson has been so smooth is in part due to the fact that they had both been pretty hard at work already during the hand-over period, and in part to Patrick’s amazing efficiency, knowledge of and care for the Festival’s administration. We are lucky that he is keeping in touch by acting as the Treasurer of the Festival Association. We thank him, Dermot and Janet and we wish Clare and Peter well for this and successive Festivals. Thanks are also due to our superb choir directors Jeremy Summerly (his twenty-first Festival), David Trendell and Andrew Carwood, to organists Robert Quinney, Julian Thomas and Matthew Martin, and to David Belcher, John Barnard, Adrian Hutton, Christine Laslett, Antonia Southern, Pat Dielcock, Gilbert Green, John d’Arcy and Jeremy Moore, who all do so much to ensure the Festival’s success and to keep the Director calm. We are as ever very grateful to the host families in the village and surrounding area. All this effort, generosity and goodwill creates an atmosphere that is indeed unique and precious, and is perhaps a fulfilling of liturgy both within the Priory and outside it – ‘the people’s work’.